Our unique positive feedback system that operates via virtual hugs and also pays back – literally.

Our unique positive feedback system that operates via virtual hugs and also pays back – literally.

Hugs is Wunder’s long-term companion for receiving and giving positive feedback between colleagues and sharing employee feedback with management. Hugs is an online application developed by us, which we have successfully used for several years. The twist of this feedback system comes here: while Hugs spreads a good mood and brings colleagues together, it also works as one of our bonus systems. Each hug has a monetary value, and every once in a while, the so-called hug money will be paid with salary. Let us walk you through the whole system.

It is essential to get recognised for a job well done. Hugs’ primary role is indeed to virtually hug a colleague for any reason you might have, work-related or not – hugs are not monitored.

All Wunderers have an account for the Hug system. Each Wunderer has five hugs per week to spread. Hugs can be given anonymously or with a name, with a small note of why one decided to hug them. Hugs can be distributed between five Wunderers, or all the weekly hugs can be given to the same person.

Here are some hugs Wunderers have given to each other over the years:

Your attitude is like good coffee; much needed and absolutely refreshing. <3

For joining a meeting from a hammock in Spain – like how we all should!

Thank you for helping me grow in my role.

The positive feedback given between colleagues is also brought to the eyes of the management and Talent team. This way, the managers and HR also get to see all the positive feedback an employee has received from their colleagues. However, the Hug system includes all Wunderers from CEO to part-time employees and everyone in between.

The Hug system then automatically delivers the received hugs every week in a Hug report. At Wunder, the day of receiving the Hugs from the week before is always the most awaited moment of the week.

We have had Hugs in more or less similar form since 2013, and every week hundreds of hugs are given. Of course, the main motivator to hugging is the positive feedback, but Hugs act as Wunder’s bonus system as well. 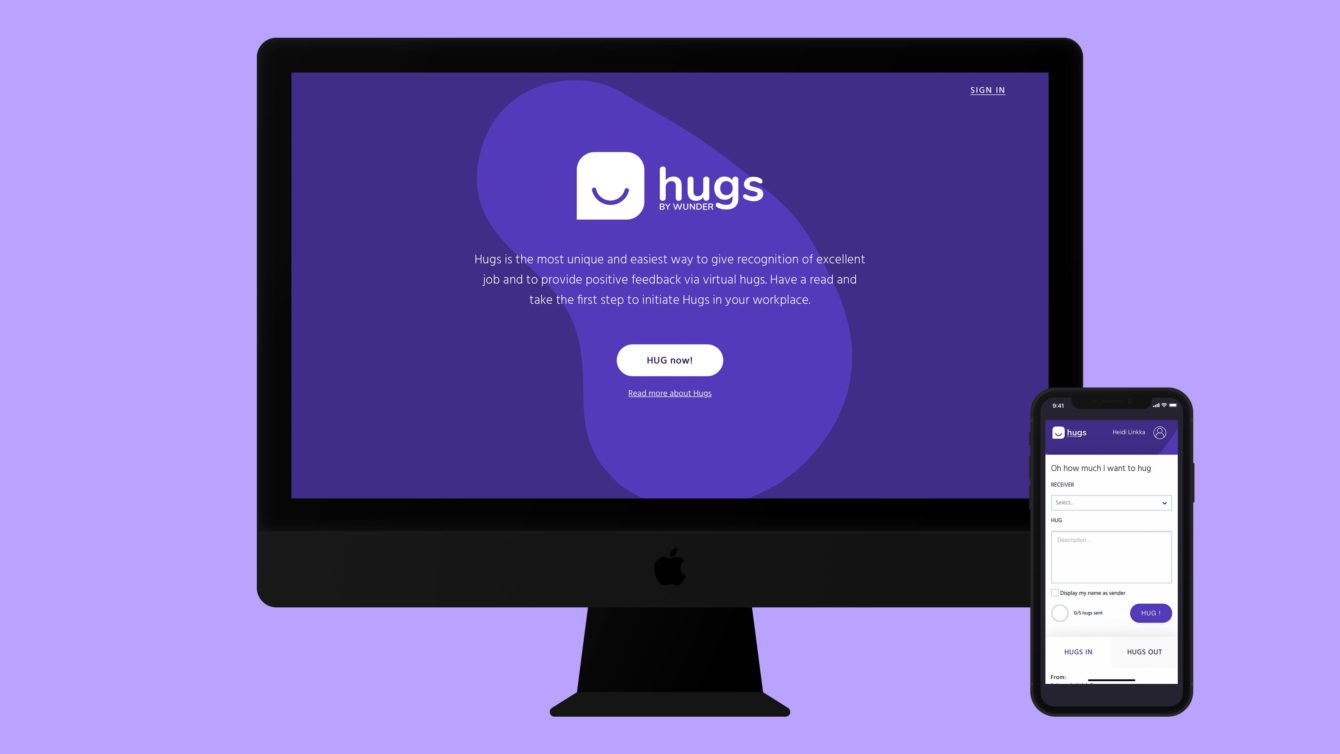 Hugs as a bonus system

We bet there are not that many bonus systems that are this well linked to positive feedback as our Hugs is. Many bonus systems distinguish the different roles within the company and give people in different roles very different opportunities to receive extra on top of their salary. But at Wunder, as everyone has an equal opportunity to receive hugs no matter their position or location, it also serves as a deft tool for paying bonuses. Because what would be better than receiving money from positive feedback?

The monetary value of one hug is usually something between 2-10€. Why it differs is because the value depends on company performance per week. The amount per hug may sound small, but the system actually pays out a six-figure number of bonuses for Wunderers yearly.

Another specialty with Hugs is that the timing of paying out the hug money is left to chance.

Each month some of the Wunder offices –remote or physical– roll a dice. If the dice stops at six, the hug money is paid with the next salary. If the number is anything but six, the next nominated Wunder office gets to roll the dice twice, and the office after them three times, etc. Rolling dice may sound boring and unimaginative, but as you can see from the videos below, that is not the case within Wunderers.

We have hugged each other online since 2013, so it’s safe to say that the system is deeply integrated into our culture. Moreover, the whole Hug system describes Wunder’s work culture very well: we are open and curious to seek alternative ways to do things our way.

Would you like to hear more about our work culture or about the digital solutions we have created? Leave us a message below and we’ll be in touch!