Wunder Notes from the DriesNote

On Wednesday, 14th of April, during the DrupalCon North America 2021 the founder and Project Lead of Drupal, Dries Buytaert gave a DriesNote. We were there – listening and writing our own notes and now ready to share them. 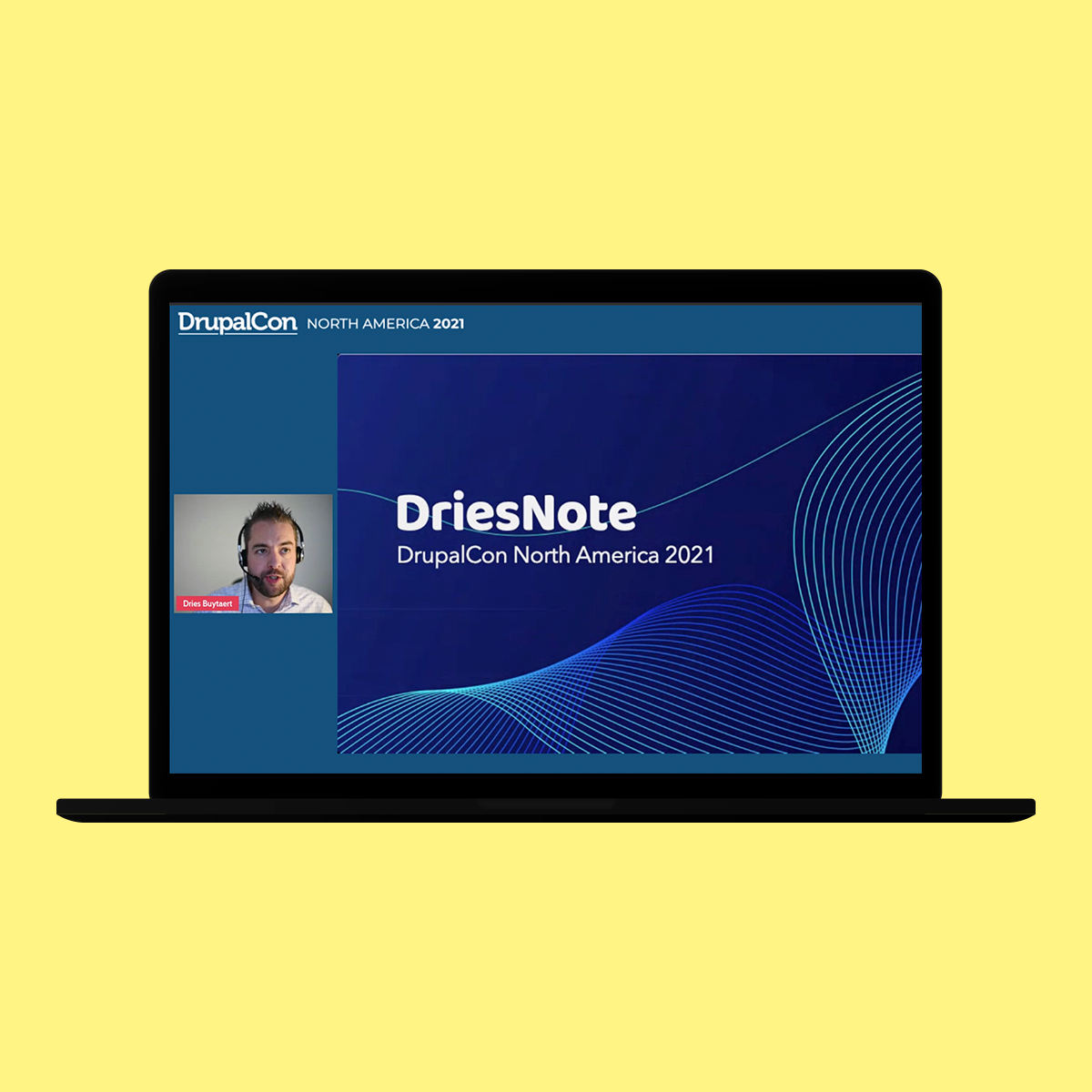 Those who are familiar with Wunder know that 99% of our digital solutions are built with Drupal. Those familiar with Drupal probably have attended or at least heard of Drupal community events as Cons, Camps, and Meet-ups. And those who at least once have participated in a DrupalCon know that the most popular session is the DriesNote.

I myself have been an active Drupal community member for 12 years and have 6 DrupalCon experiences in my pocket. And as this is the week of DrupalCon North America 2021, which like most of the events, is virtual this year (thus more accessible for people around the world), I sure did not want to miss it. So, here are my notes from the DriesNote.

Dries Buytaert founded and has been leading Drupal for 20 years now. The community highly anticipates his DrupalCon keynotes, which covers the state of Drupal, moments of celebration and reflections from Dries himself. DriesNote always gives a sense of purpose and direction to the community, in a way.

This time in a virtual event with 2300 attendees, it was clearly stated that contributions are the cornerstone of Drupal success. There are many activities planned to remove the possible barriers and embrace new contributors.

Dries divided his keynote into three topics: 1st: Drupal 9 and Drupal 10, 2nd: Site builder: the forgotten user, and 3rd: Getting off the island.
Let me open up each of them a bit. 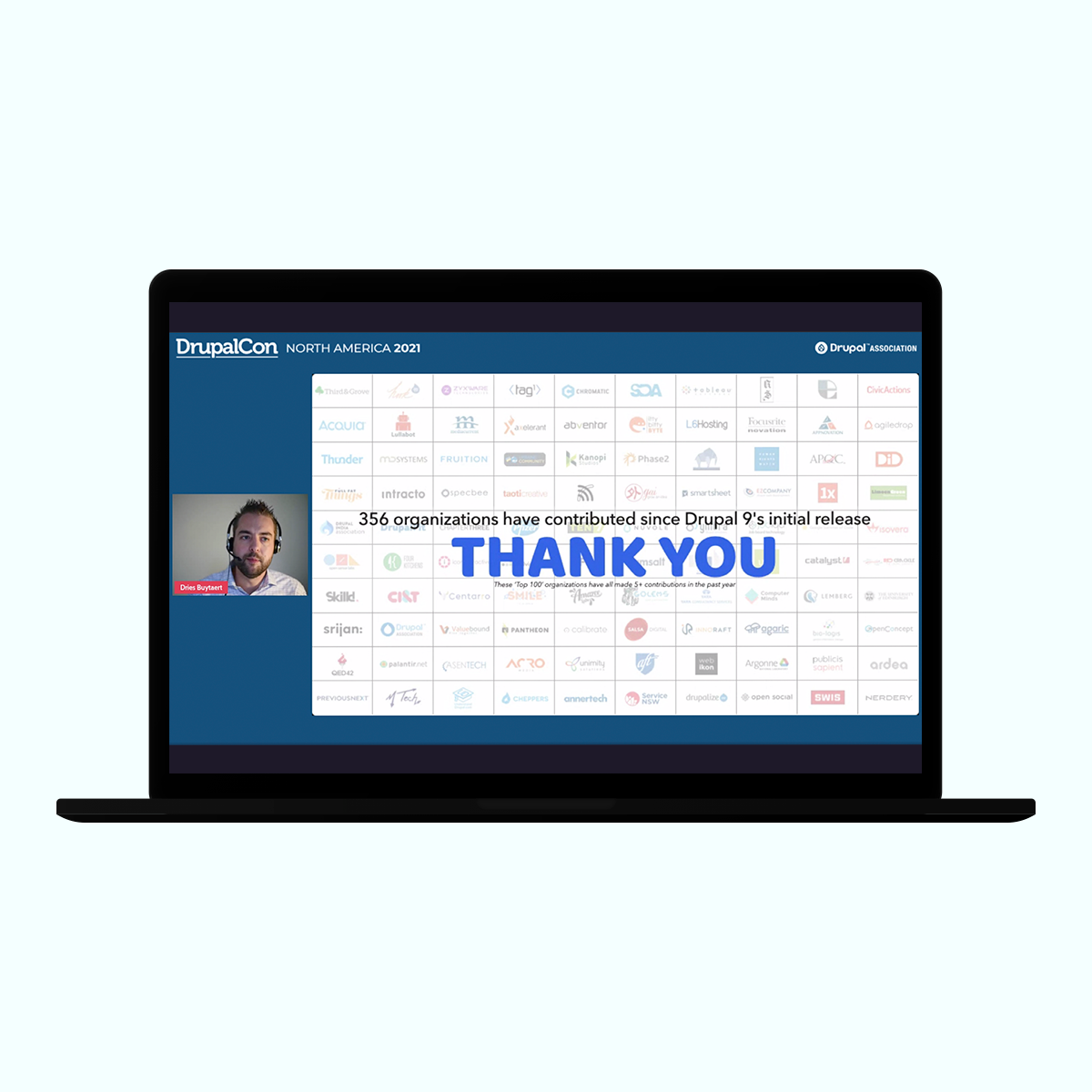 Drupal 9 has been adopted quickly on all fronts after its release 10 months ago. The upgrade path from Drupal 8 to 9 is easy and backward compatible. That’s why it took only 1 month after the Drupal 9 release to reach 60,000 Drupal 9 websites (including websites from Red Hat, WWF, Nato, Budweiser, IBM, etc.).

Also, the top 50 Drupal contribution modules are ready for Drupal 9, and they are ready today (again, after only 10 months of Drupal 9 is released). This is a huge improvement compared to Drupal 8.

Drupal 10 release is planned for summer 2022, and at the moment, there is work ongoing in these 5 initiatives:

We will not go through the details of these strategic initiatives now; all of them can be found on drupal.org.

The Drupal 10 release is closer than it looks, and Dries wants to highlight how important it is to the 9.3 development cycle because it’s the biggest chance to include all changes and new features in Drupal 10 before the time window closes.

By the way, 1152 individuals and 356 organisations have contributed since the Drupal 9 release, impressive!

In the second part of the keynote, Dries reflected on Drupal strengths and identity. After 20 years being out there, has Drupal lost a bit of its identity? Inspired by the story of Satya Nadella, CEO of Microsoft, on how they brought Microsoft back to its roots, Dries thinks about Drupal roots and the site builder persona.

It’s quite clear that Drupal has left behind the amateur site builder with Drupal 8. Many Drupal developers started their careers as site builders, without huge technical knowledge and got hooked by the power of this technology. But in the pursuit of making Drupal more enterprise-ready and embrace complex ambitious projects, this persona now seems to be forgotten. For some, it has caused a gap between the old-time Drupalists and the new people adopting Drupal for simple websites. In my mind, if not addressed, this gap could be obstructing the Drupal project in the future.

Dries wondered, if Drupal could embrace again this forgotten persona, what’s the single thing we could do to empower the site builder? He himself proposes a “Project browser”, a list of 1-click installation projects that can be added to one’s Drupal site, like 1-click apps you install on your phone.

He is so excited about it, that he will lead this new initiative to bring the Drupal community even closer together. “It has so much sense that it hurts”, Dries recognized. Explore more the Project Browser initiative to get involved. Blog post on dri.es coming soon. 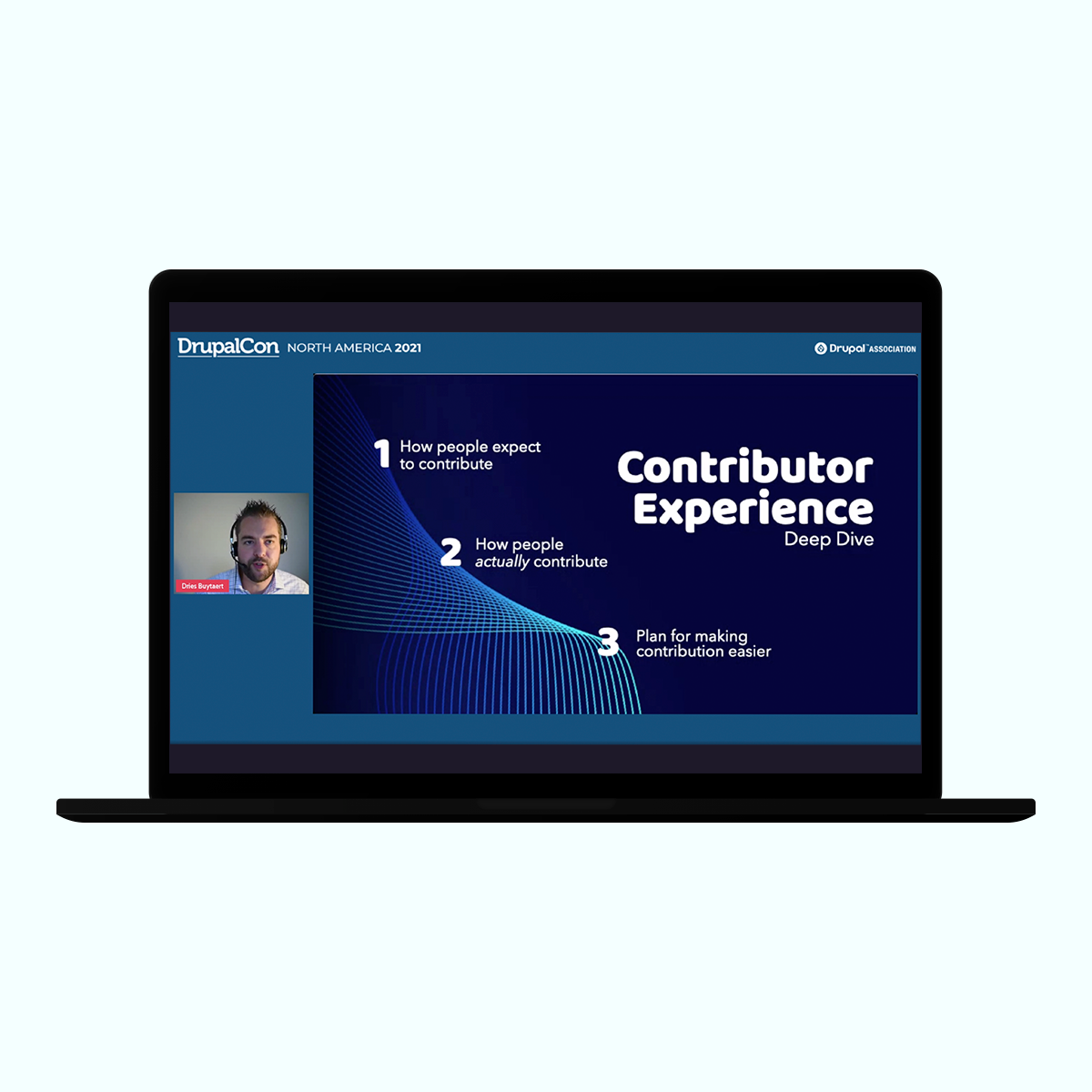 Getting off the island

Very few open source organisations are operating at the level Drupal does. Coordinating thousands of people and working together is not the easiest job!

Drupal.org has been building a lot of custom tooling to support the community, projects, and Drupal code. But the way open source is developed nowadays has become different. For example, Github and Gitlab are better equipped to provide a great development platform and they are well funded to support quicker innovations. To illustrate the difference, Dries played a humoristic, yet eye-opening video on how easy it is to contribute to Symfony in comparison to Drupal.

Drupal partially adopted Gitlab months ago, but it’s time to get totally “off the island”, and do things the way open source contributors expect. Gitlab will be adopted fully and workflows will be re-imagined to embrace and make the new contributions as easy as possible. The transition is aimed to be completed by 2022, and sponsors are searched to accelerate that.

During the Q&A session, it was said that Drupal contributions are needed, and the Drupal Association is ready to incentive them. The credit system Drupal.org has developed is one of the ways to reward those who contribute. It’s a win-win for companies, it helps to get deals and attract the best talent. Dries has written about the Balancing Makers and Takers to scale and sustain Open Source earlier in his blog.

We at Wunder take care of each other and nurture a culture of trust, therefore our special thanks to Dries for starting the keynote, with 30 seconds of silence to show the support for #blacklivesmatter movement and honour those Drupal community members that had passed away of the Covid-19 pandemic. It is important to belong in a community that cares – and shows it.

We are proud that Drupal is used by 3 out of 4 companies developing Covid-19 vaccines, indirectly supporting those who are saving our lives. And at the same time, even though the global pandemic forced DrupalCon North America to go virtual, the positive side effect is that it made the event more inclusive and accessible for people around the world, including us.

Want to hear more? Stay up to date with our newsletter!